“Her passion is distracting; she clearly feels it. And it’s infectious – it isn’t long before you’re asking yourself why you never learned to play an instrument like that.” – Copenhagen Online Post, Roskilde Festival 2015 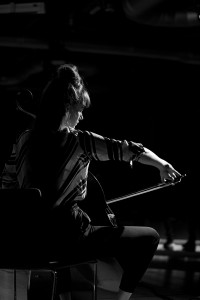 Josefine Opsahl (b 1992) unites her classical musical roots with a liberating openness to her instrument, sounds, genre and the use of electronics which shows in her own compositions as well as in her two groundbreaking ensembles, We like We and KOTTOS, with whom she is touring all over the world, latest around China and accompanying HM The Queen of Denmark to Argentina alongside the Royal Danish Ballet.

Her musical skills and creative approach has positioned her as one of the leading forces on the international scene. As an icon of a conscious, contemporary musician she writes, curates, improvises and performs equally and extends her musical worlds through collaborations with other artists, curators, festivals and spaces beyond the grid of genres and expressions.

This has resulted in commissions for museums, galleries, festivals such as the Danish Golden Age Exhibition at the National Gallery of Denmark, the UTZON100 celebration, ‘Time is Local’ a 12-hour multichannel installational performance for Thorvaldsens Museum and an opera in collaboration with We like We, Nordic Opera and Cph Opera Festival. She is currently working on a piece for 10 celli for CLICK Festival, May 2020.

Josefine’s works reflect her own artistic search towards understanding the role of art in our society and the tension between tradition and renewal, expertise and intuition. As a mirror of this her electroacoustic works build on and combine a classical musical tradition and sound aesthetic with modern mediums of expression. Her ‘Sonic Lithographies’ reflects our electrified modern world by reclaiming electronically damaged sounds back to the simpel expression frame of acoustic instruments.

Her works has been performed throughout Europa, in China, Argentina and Brazil and her album releases have received rave reviews and awards, recently the Round Glass Music Award 2018 (US) and the Danish Radio P2’s Listeners Prize.