Chamber Opera for 5 voices, violin, cello, double bass, percussion and spinet. The opera was comissioned by Nordic Opera, libretto by Merete Pryds Helle, dramaturgical guidance by Michaela Granit and it is kindly supported by The Danish Arts Foundation alongside Dansk Komponistforening. The work is published by Editing Wilhelm Hansen. For any inquiries regarding the score contact Edition Wilhelm Hansen.

Premiere at Den Ny Opera in Esbjerg (DK) May 8th-9th 2022.Then touring to Folkoperan in Stockholm (SE), Skuespilhuset at The Royal Theatre in Copenhagen (DK), Halland Opera and Vocal Festival and Kalmar Slot (SE) dates TBA. 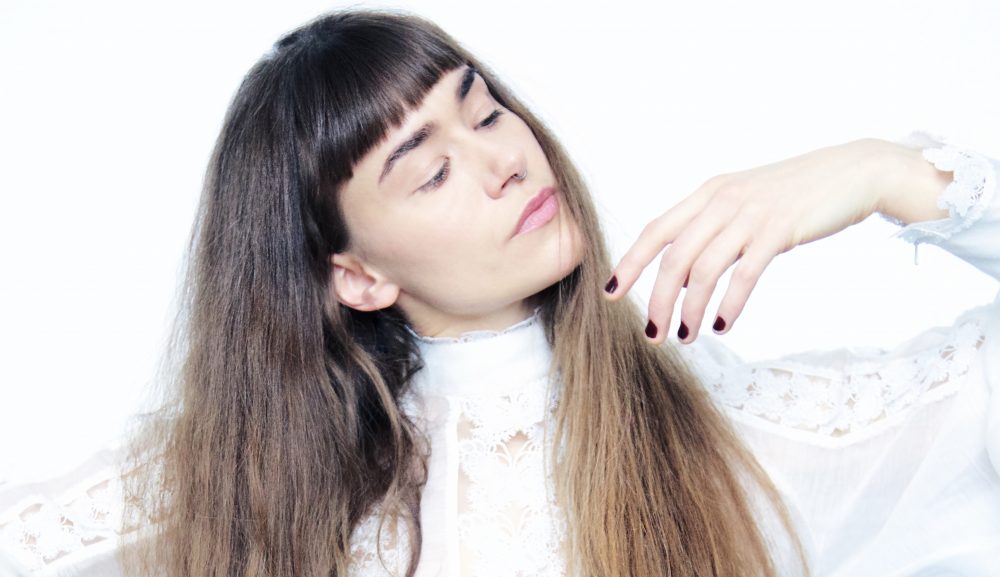 Work for male-voice choir, woodwind quintet, solo cello, live electronics and 6 ballet dancers. Written in honor of Her Majesty The Queen of Denmark and premiered at her galla dinner at Deutsche Historisches Museum in Berlin during her official state visit November 11th 2021.

The piece featured The Royal Danish Ballet in a new choreography by Artistic Director of the ballet Nikolaj Hübbe, The Copenhagen Royal Chapel Choir conducted by Chief Conductor Carsten Seyer-Hansen and Livgardens Musikkorps playing. Dar Salim lead us all elegantly through the evening. 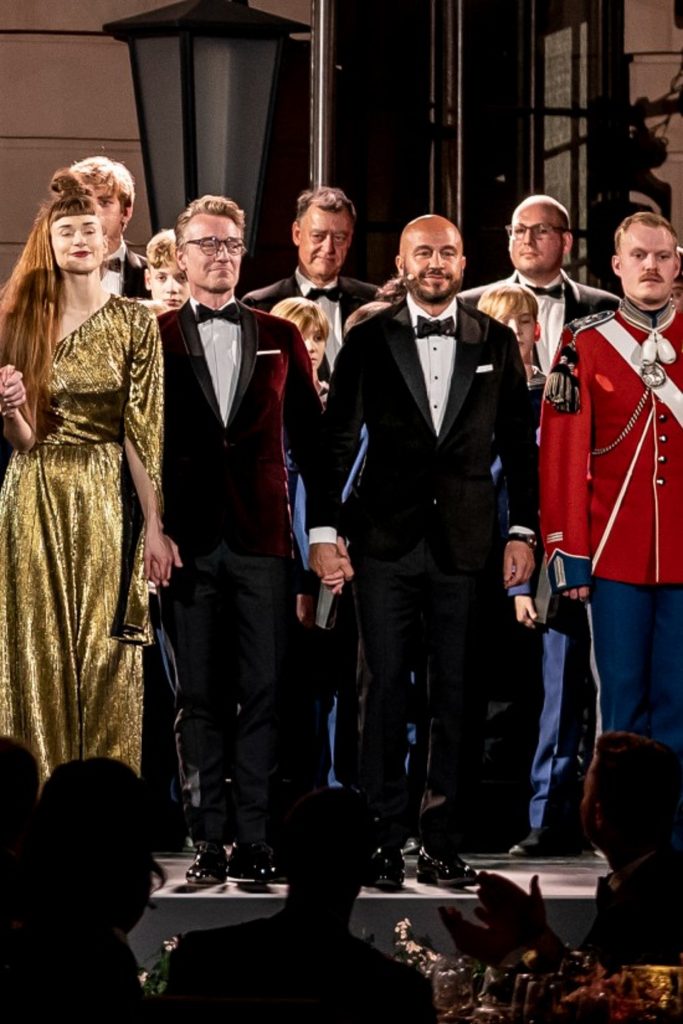 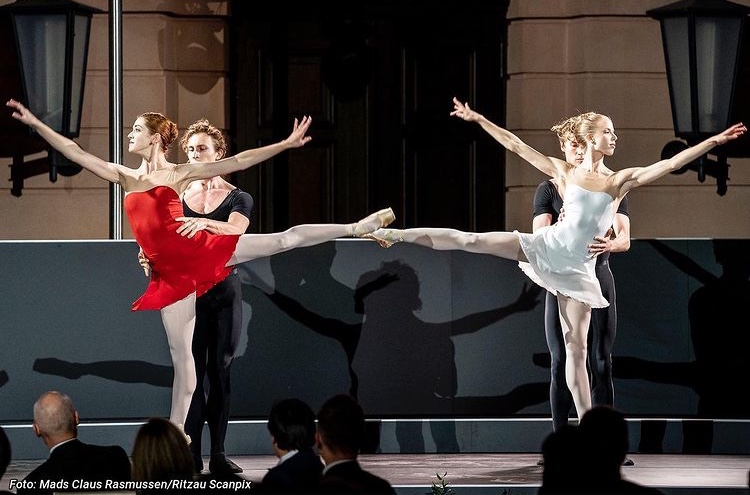 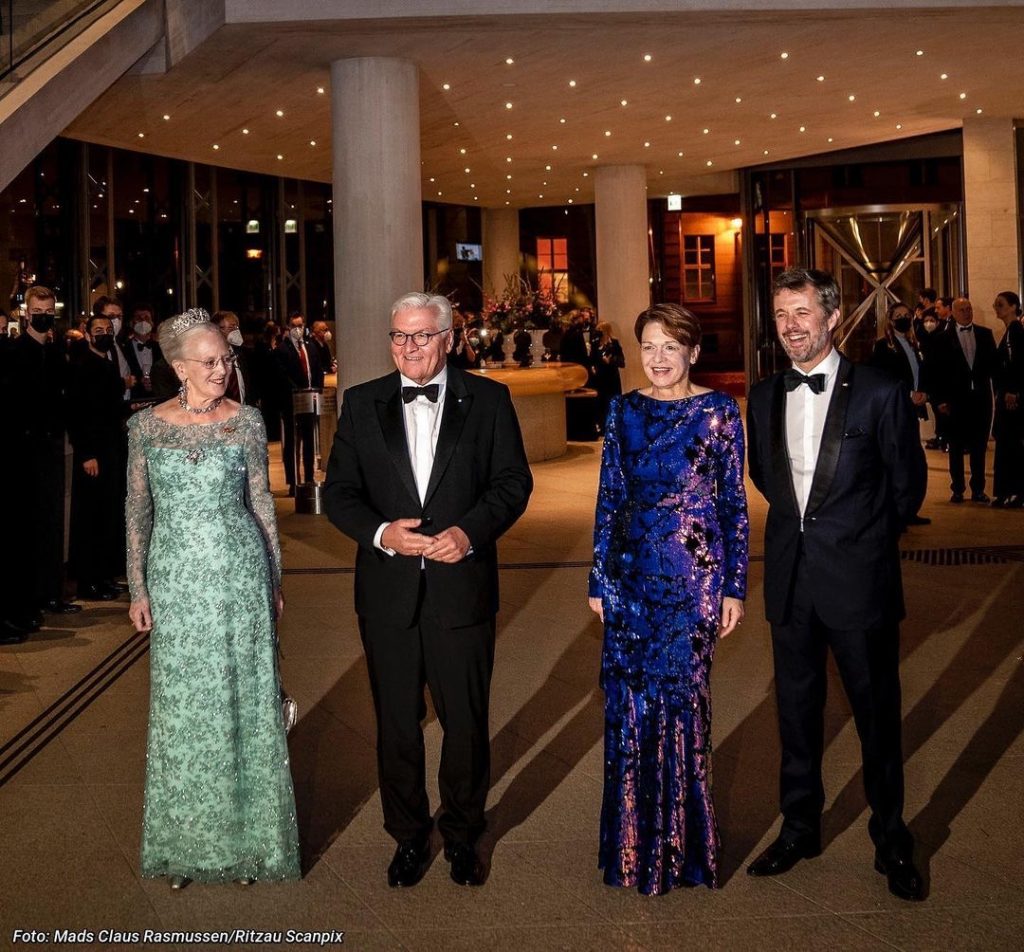 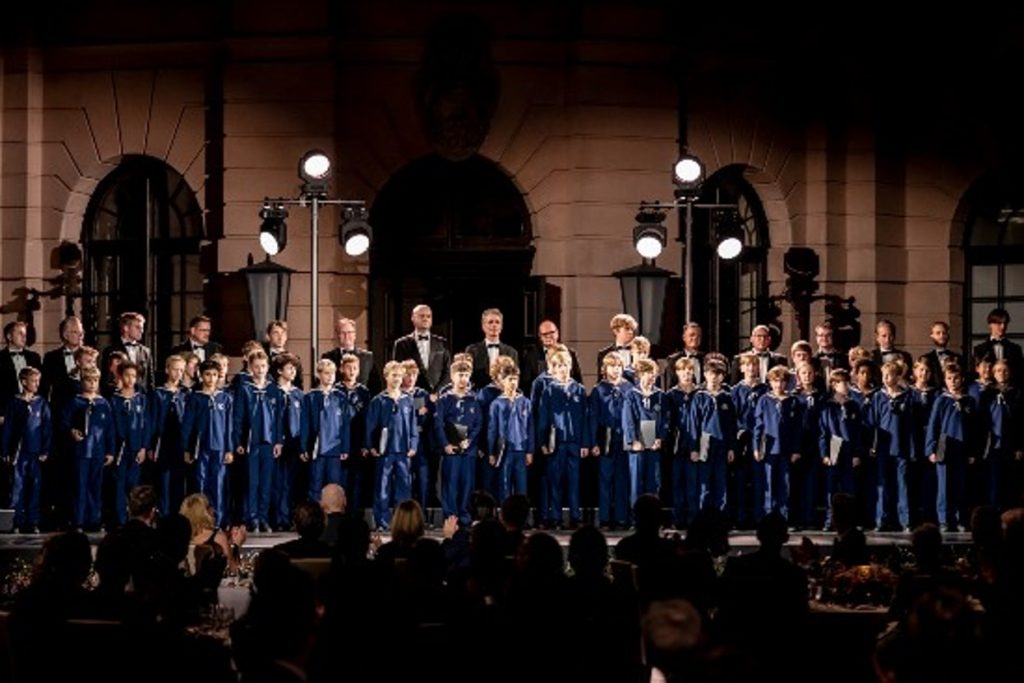 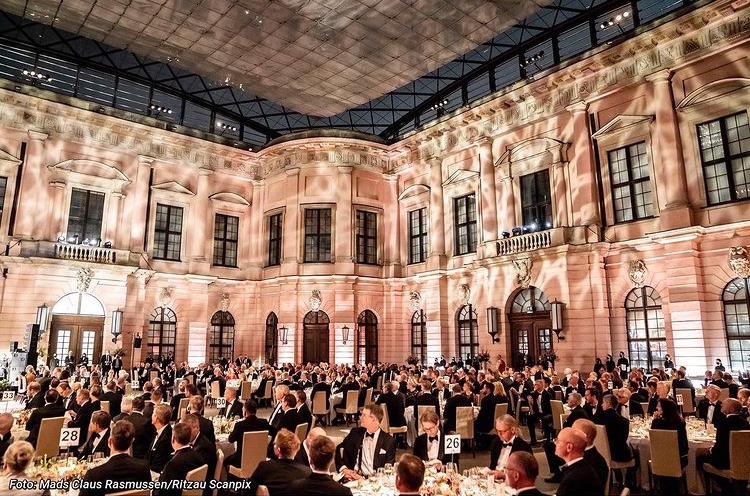 I WALK I BLEED 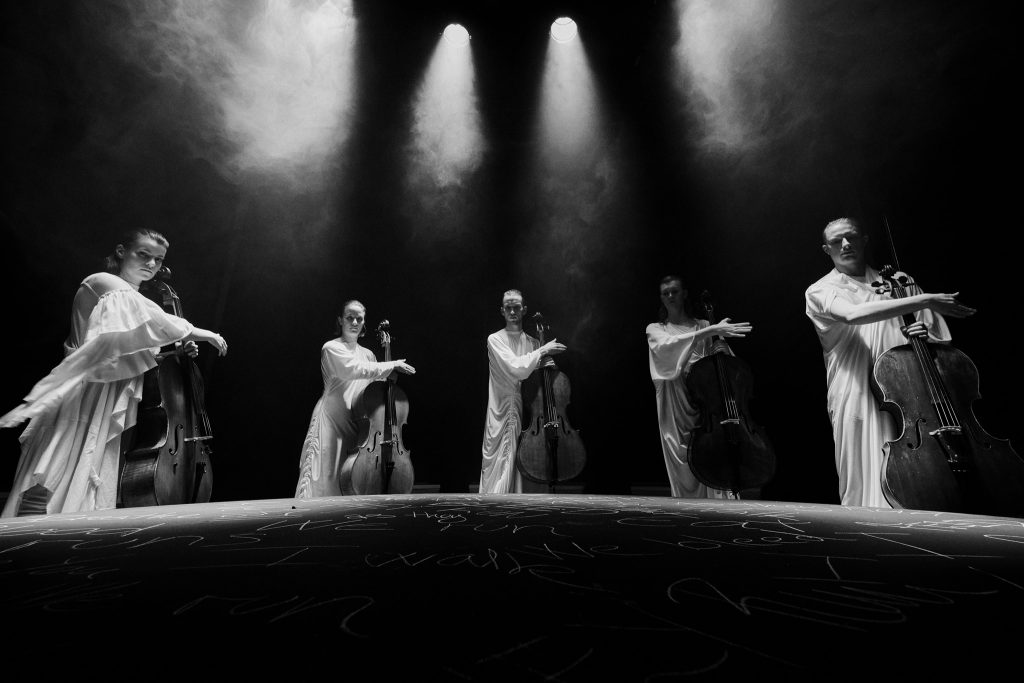 Ekklesiaterion is an exploration of time and place, bodies and sonic bodies correlating. In an hour long performance Josefine Opsahl animates and surrounds the listener in a quadraphonic force field of sound that brings performer and audience together in a praise of sensing collectively. Acoustic and electronic, real and surreal, intimate and the cosmic interfere and calls upon ancient rituals and foundations for democracy.

Quadrophonic sound design made in collaboration with Tomas Kærup. 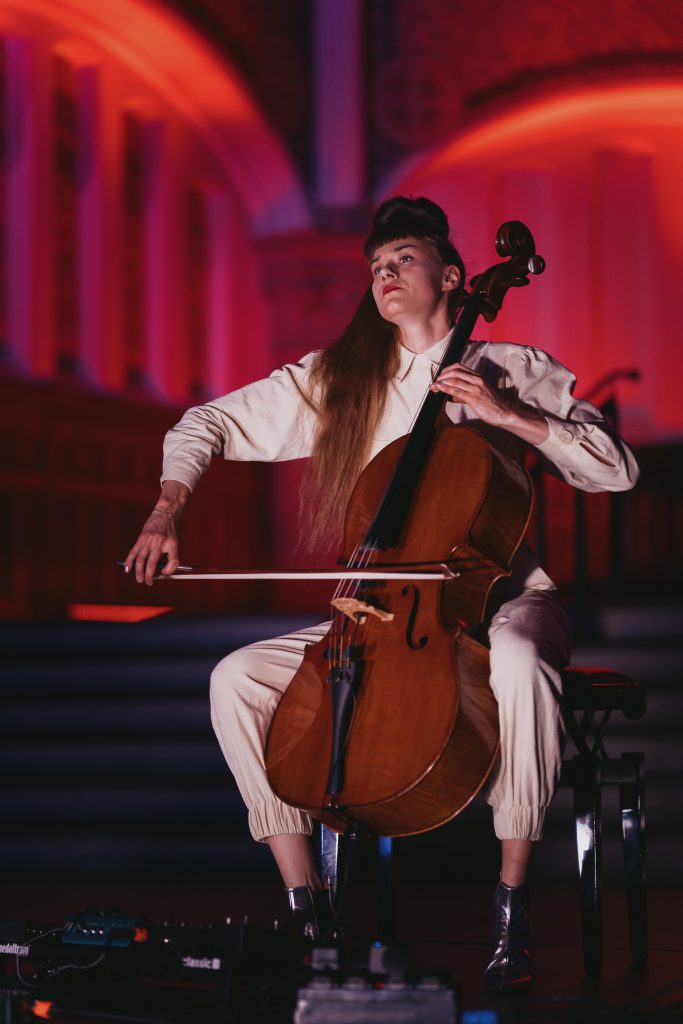 An exploratorium of the opera as a diverse, including and contemporary genre through a gender diverse and norm critical perspective lead by OperArkitekterne c/o conductor Rose Munk Heiberg and composer Josefine Opsahl.

The project took its first steps in a workshop in collaboration with Sort/Hvid in Copenhagen, May 2021. A full opera and a podcast of the thoughts behind and the progress is in the making. 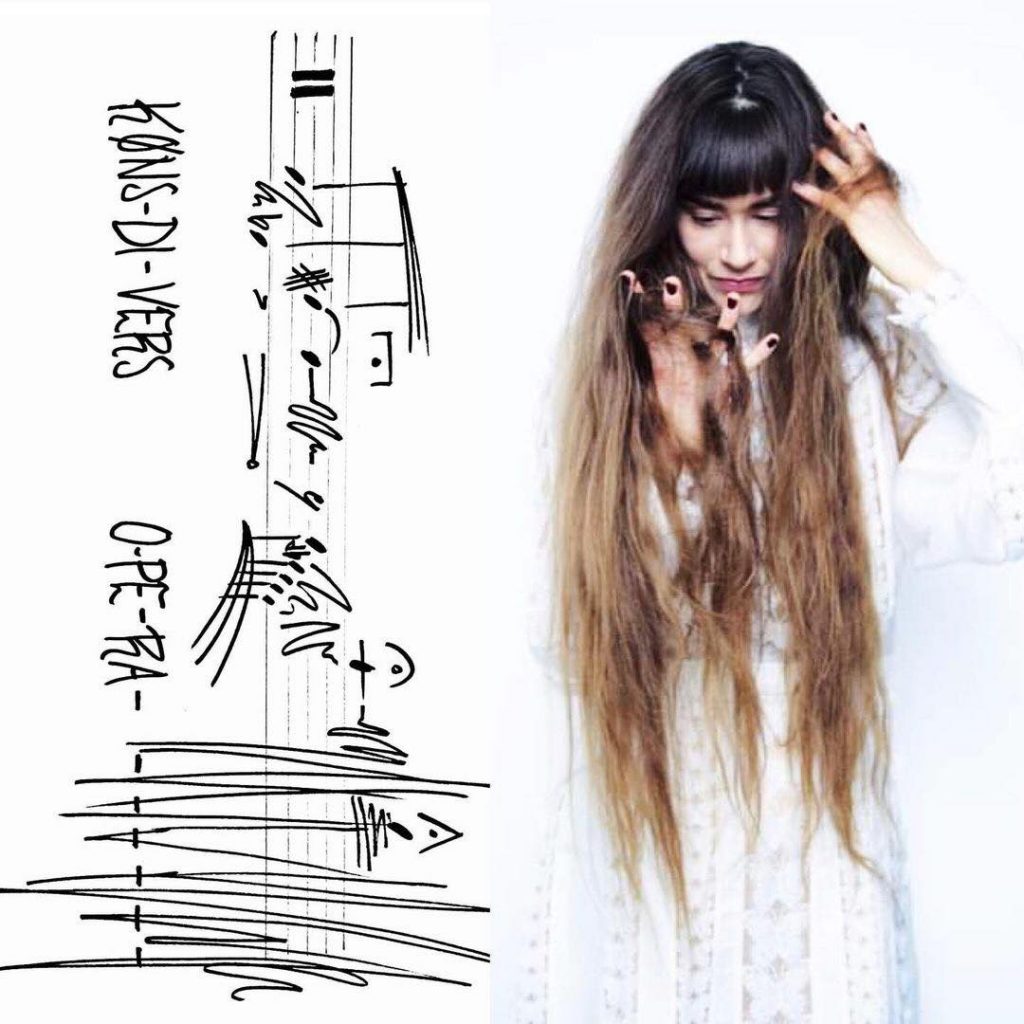 – MOVEMENTS OF THE BODY ELECTRIC –

A concert trilogy created for the Ambereum Stage at Roskilde Festival 2021 exploring sound and movement in a juxtaposition of the most bare acoustic sound worlds interfering with digital – a real world interfering with otherworldly altitudes questioning: where are our real and digital bodies heading anno 2021? (Concert Trilogy premiere postponed due to covid-19, preview of the work at GRASP Festival 2021, DK). 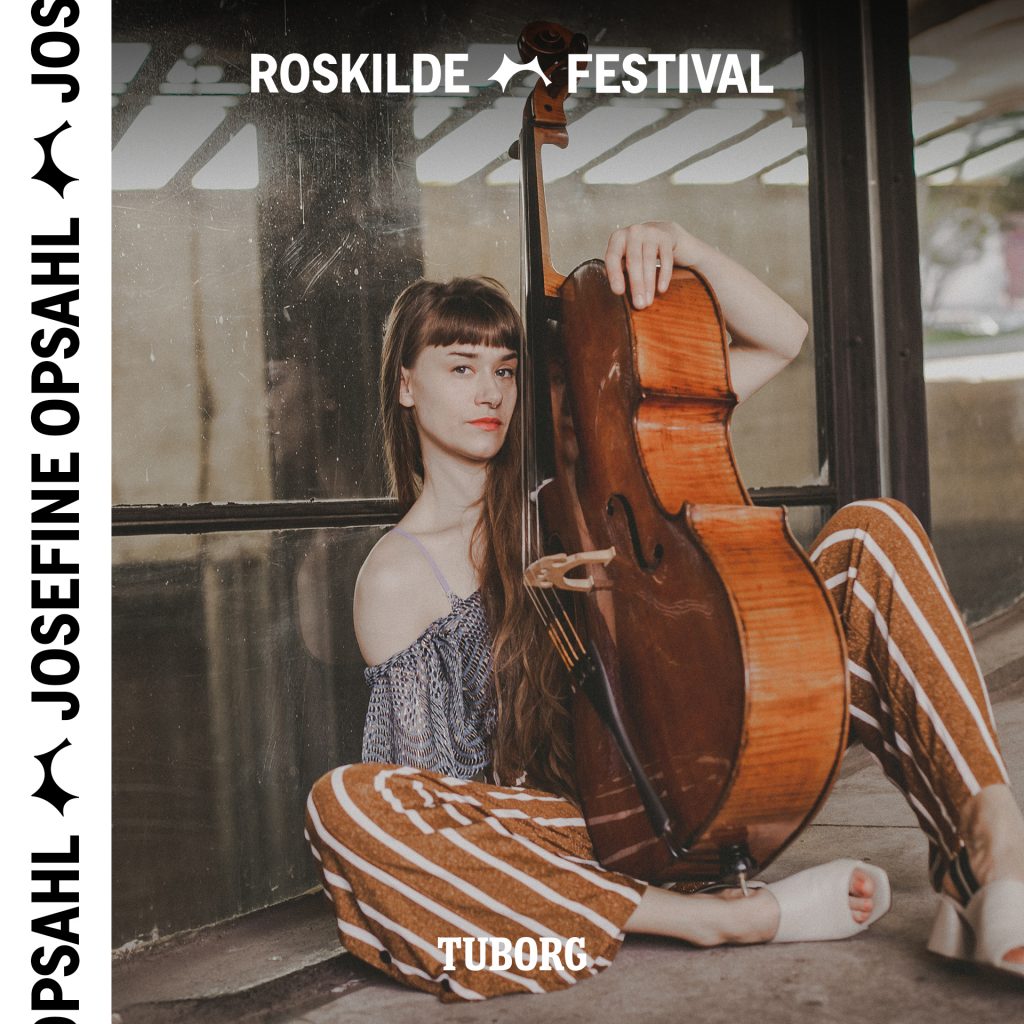 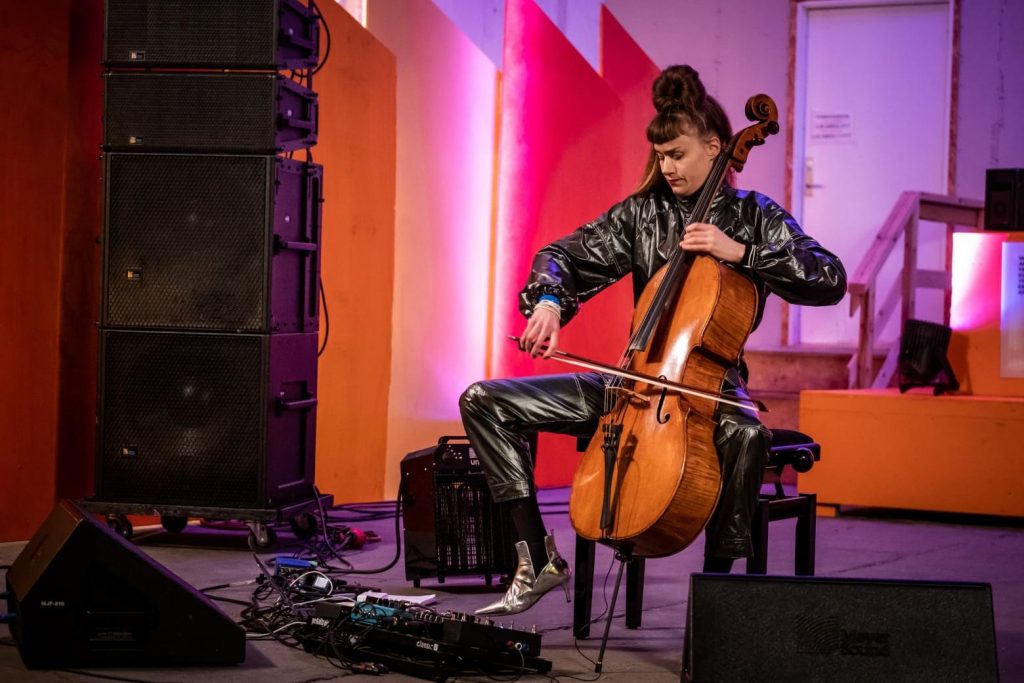 Movement 1: The Body Instrument // The Divine Body: Solo cello and electronics. ‘To be surrounded by beautiful, curious, breathing, laughing flesh is enough’

Early day concert. Starting from bare acoustic sounds, the cello unfolds its deep and dark tones. Its register similar to the human voice. A dancer extends and completes the musical body. This integrated body instrument moves and evolves organically in the field of exploring movement before sound and sound before movement. The intimate touch of the sound and the sight of the body moving accordingly surrounds the observer in curious, breathing, laughing flesh. As the shared gentle intimacy unfolds the movements awaken unearthly layers of sound – an electrified dimension – as in a shamanistic rite. Electronic manipulations of the cello rises as spiritual mirrors of the scenery and its divine body gradually manifests meanwhile the body instrument praises this invisible, mystic, unearthly divinity of an electrified, digitalised world.

Movement 2: The Sonic Body // Sonic Lithographies: Solo cello, 8 instruments and Mårten Spångberg’s 4 dancers. ‘The universe is a procession with measured and perfect motion. All is a procession’

– Evening concert. Sonic Lithographies reflect alien fierceness of an electrified world that society is built upon without questioning its strange and inhuman nature. Flesh, wood, hair, bone and metal examine its own substance and unites into an organic imprint of electronic music – a sonic lithography. Praising the collective movement and the perfect design and motion of the universe a solo cello and 8 percussionists perform Sonic Lithographies in an acoustic sound installation. The instruments unite in an eternal pulse and synchronicity that puts us in a trance and reminds us of our shared biology and body processes that praises the ‘join(ing) in movement with one purpose: curious sympathy’ as Walt Whitman writes.

Movement 3: The Collective Body // The Body Electric. Solo cello and Techno duo Feat. M€RCY. ‘Do you think matter has cohered together from its diffuse float, and the soil is on the surface, and water runs and vegetation sprouts, For you only, and not for him and her?’

Late evening concert. The cello, a historical, elegant instrument unites with rough electronic instruments of our time and all instruments’ divine superior – the computer. Their integrated techno sounds all draw on samples, live sounds and noise from a cello and reflects a union of dissimilarities mirrored in time, place, human thought and creation. The performance celebrates mass movement, unisonity, the closeness and intensity of bodies moving for a common cause. Independent of genres and rules of expression the omnipresent sound and rhythm breaks down all reason for differentiation. The before, the now and the time to come melts into movement without age and bonds that unites us in shared curious sympathy. The ‘curious sympathy (that) one feels when feeling with the hand the naked meat of the body, O I say these are not the parts and poems of the body only, but of the soul, O I say now these are the soul!’

Residency at Thorvaldsens Museum in Copenhagen. A series of pieces for chamber ensemble reflecting on the relief, its meaning then and now, its motifs, structure and the phenomenon of projecting from but belonging to the wall. Concerts and performance dates TBA summer 2022. 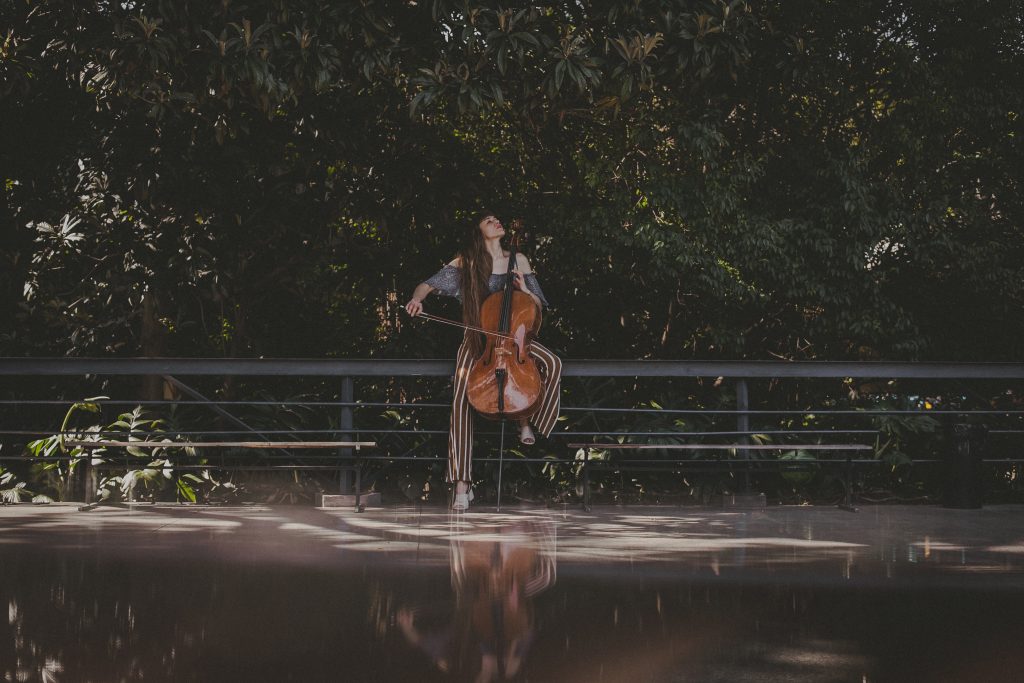 – ALONE IN THE BLACK DIAMOND –

Live-stream solo performance during lock-down in the Old Reading Room of the empty Royal Library in Copenhagen / The Black Diamond. Contemplating over the art of handwriting, the importance of the connection and balance between mind, thought, body, hands, time, space, isolation and togetherness in old crafts like writing and performing on an analogue instrument. 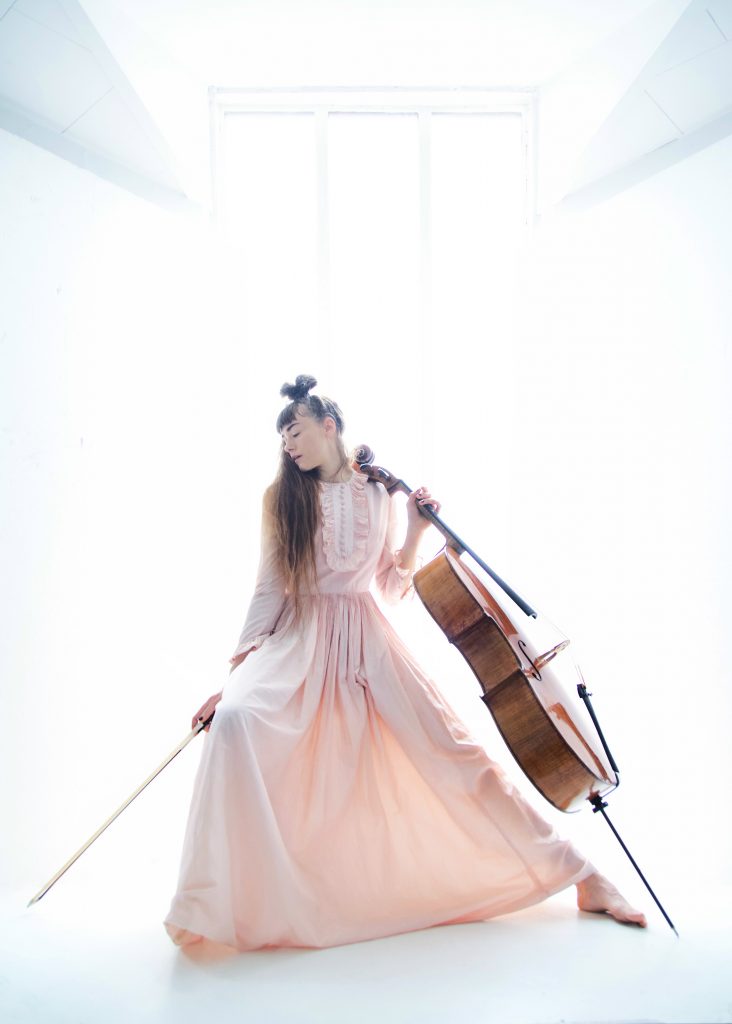 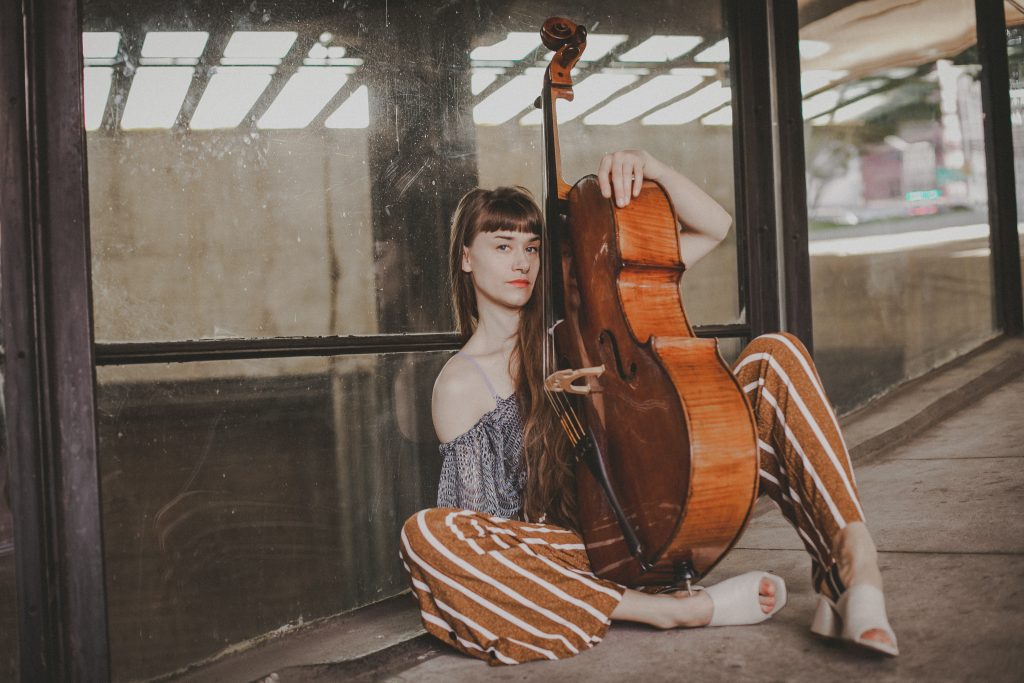 ‘Nōlī turbāre circulōs meōs’means ‘Do not disturb my Circles’ and is what the Greek mathematician, astronomer, philosopher and engineer Archimedes said to a Roman soldiers when he asked him about the structures he was drawing in the dirt. The Roman Soldier subsequently killed him. (approx 210 BC)

Archimedes is today perceived as one of the most important founders of our perception of logic, philosophy, geometry and mathematics.
The story of his circles and his death is a typical image of how even slight differences in behaviour or thought point us out as misfits in our uniform society.

The sound world of ‘Nōlī turbāre circulōs meōs’ is based on imprints of electronically damaged sounds. It reflects the alien fierceness of an electrified world that society is built upon without questioning its strange and inhuman nature. Musical fragments are thrown around as acoustic delays, loops and feedbacks between the instruments of the ensemble as were the fragments statements repeating themselves like in a echo chamber – the truth gradually distorting.

The piece works around musical phenomenons that mirror aspects of human behaviour in society and dives into structures as the collective: the unison, the individual: freedom of pitch – freedom of speech, monologue, dialogue, conversation, symmetri and geometrical figures with an emphasis on rhythm as the spine of the music and the everlasting collective puls that reminds us that we are all the same blood, bone, spine, ribs – and therefore interleaved as species and inhabitants on the earth.

‘Nōlī turbāre circulōs meōs’ calls upon collective movements that embraces collectivity as well as the unique human being. Everyone has an individual thought and a voice just as important as the other.
It reminds us to be conscious human beings and citizens together in a constantly changing globalised, digitalised and electrified world.

TOWN WILL CHANGE TOWN WILL REMAIN

For solo cello and electronics or string ensemble. Written for the opening of the Copenhagen Museum, February 7th. Performed by cellist Toke Møldrup with live electronics by Josefine Opsahl at the balustrade as a fanfare for the opening when HM The Queen of Denmark declared the museum open. 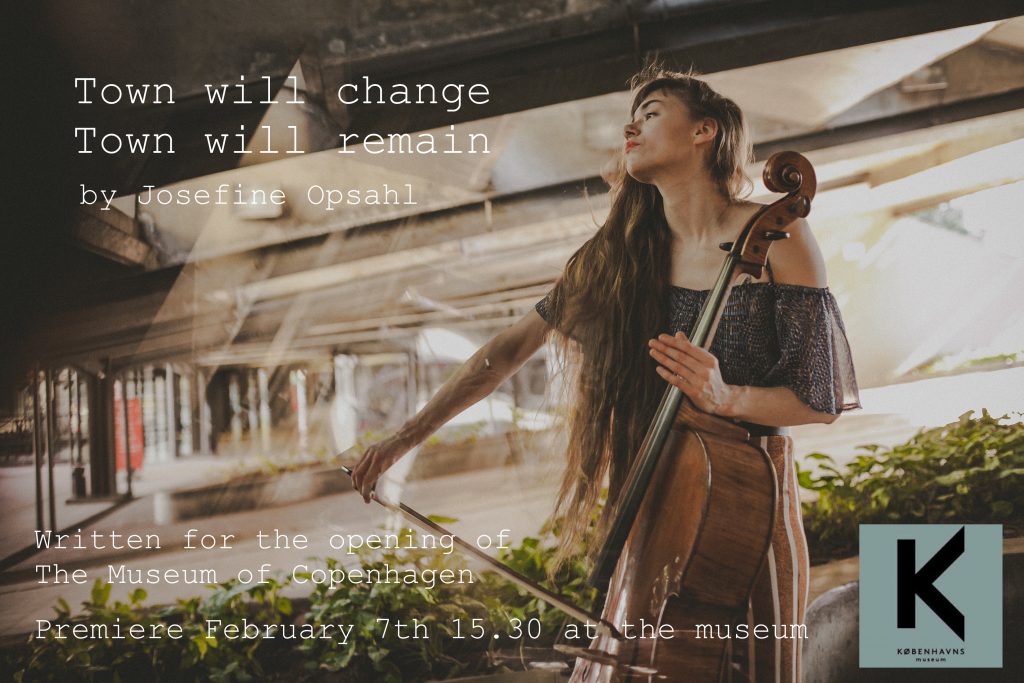 The city of Copenhagen wanted a carillon for the brand new Copenhagen Town Hall when build 1892-1905. The city commissioned 5 bells: 4 melodic ones and a 5th deeper one for the clock strokes. That was what the city could afford at the time. Composer Thomas Laub was hired to write 4 musical phrases for the melodic bells in a style that mirrored the old nordic style of the building. The bells rang for the first time at new year’s eve 1899-1900 and lead the city into a new century. Since then the bells has praised the new year welcome and strikes everyday at 12am, 6pm and 12pm.

‘Town will change town will remain’ calls upon the same musical phrases. They reminds us that we are Copenhageners, that we within changing times and globalisation are rooted a nordic tradition. The Bells gives us a point of reference for time and direction to understand our life from – in our everyday life and life in general, in the city off Copenhagen and the whole country.

For solo cello and electronics or string ensemble

Created for the National Gallery of Denmark and the Danish Golden Age Exhibition, ‘Art between two disasters’, fall 2019. The piece mirrors Elisabeth Jerichau Baumann’s painting, ‘Mermaid’ (1847) and explores the mermaid as a uniter of opposites. The piece was premiered by cellist Toke Møldrup in the exhibition, October 30 2019.

The piece was commissioned by Earunit and Cosmopol Music Group and kindly supported by The Danish Arts Foundation. 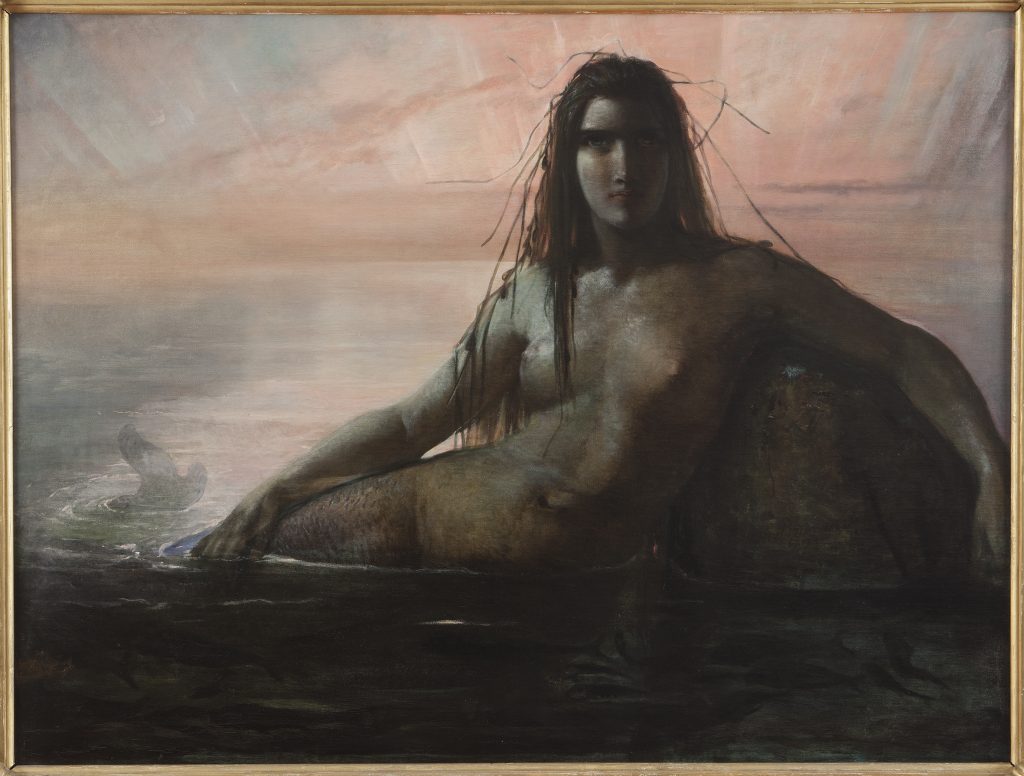 Using extended playing techniques acoustic instruments reflects alien fierceness of an electronic world that we build society upon without questioning its strange and inhuman nature.

Furthermore ‘Sonic Lithographies’ is a manifestation of how to establish rules and meaning as a basis for composing in a musical world where the imprint of electronic musical instruments has greatly surpassed any acoustic instrument by being able to sound like anything we can possibly imagine. This has confused the notion of geographical and historical affiliation in modern music which has furthermore superseded the division into musical genres. ‘Sonic Lithographies’ therefore seeks simplicity for musical exploration: wood, hair, bone, metal, catgut strings of acoustic instruments – simple raw materials that we ourself is build of.

Works in this series:

– 3 Movements for cello and guitar

– Concert for solo cello and 8 percussionists (work in progress)

For solo cello and electronics. ‘Liquid Entity’ is composed for the Utzon100 celebration 2018 and the opening of the ‘Horisont’ exhibition in Utzon Center, Denmark. The piece is inspired by the life of Jørn Utzon; his work, travels, inspirations and lifelong connection with his homeland and the ocean.

Within a baroque framework inspired Utzon’s own musical  inspirator C.P.E. Bach, the music flows and breaks into exploring different shapes of water. Unfolding in the field between classical cello and electroacoustic waves the piece evolves around an intersection of tradition and intuition, culture and nature – the modern and the timeless in a streamning continuum.

‘Aeon’ means ‘eternity’ in Greek and is the term for the deity of time. It is a heavy eternity characterized by endless and almost meaningless repetition. A reflection of what rules the lives of a great number of people inhibiting the western civilised world today.

The protagonist in ‘Aeon’, the cellist, is a picture of the individual’s struggle to push the established framework, to express itself, to manifest itself and break the cycles but for the great systems of the universe, the effort is pointless. However, the effort and the art of the struggle is beautiful regardless – and perhaps the utmost beauty lies in daring to acknowledge the pointlessness and cultivate it.

Photo from video by Asbjørn Rosenlund 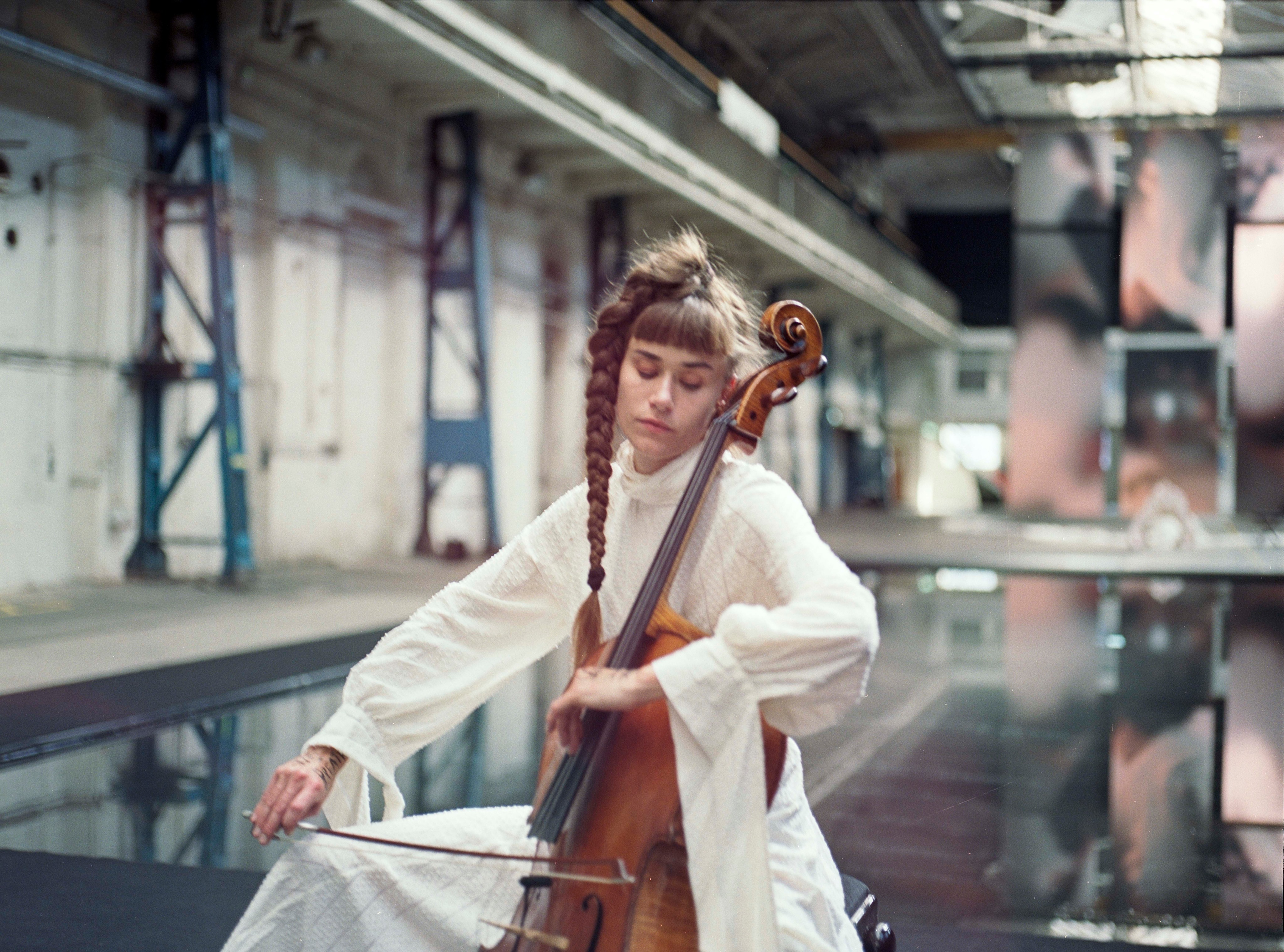 Music for IKERASAK video installation by Christian Vium. Premiered in Fotografisk Center, May 2021. 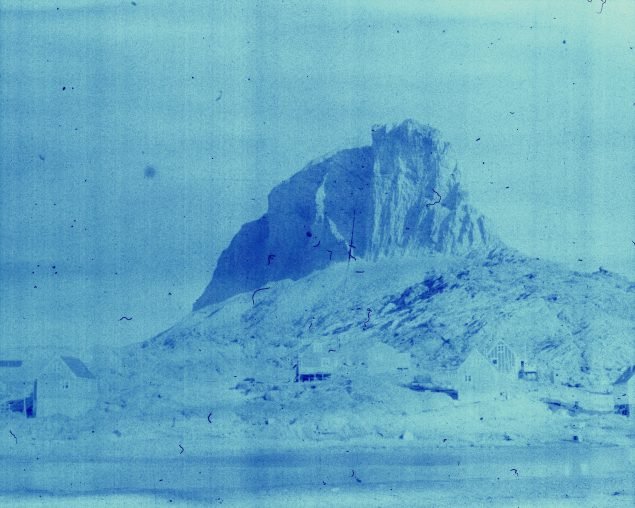 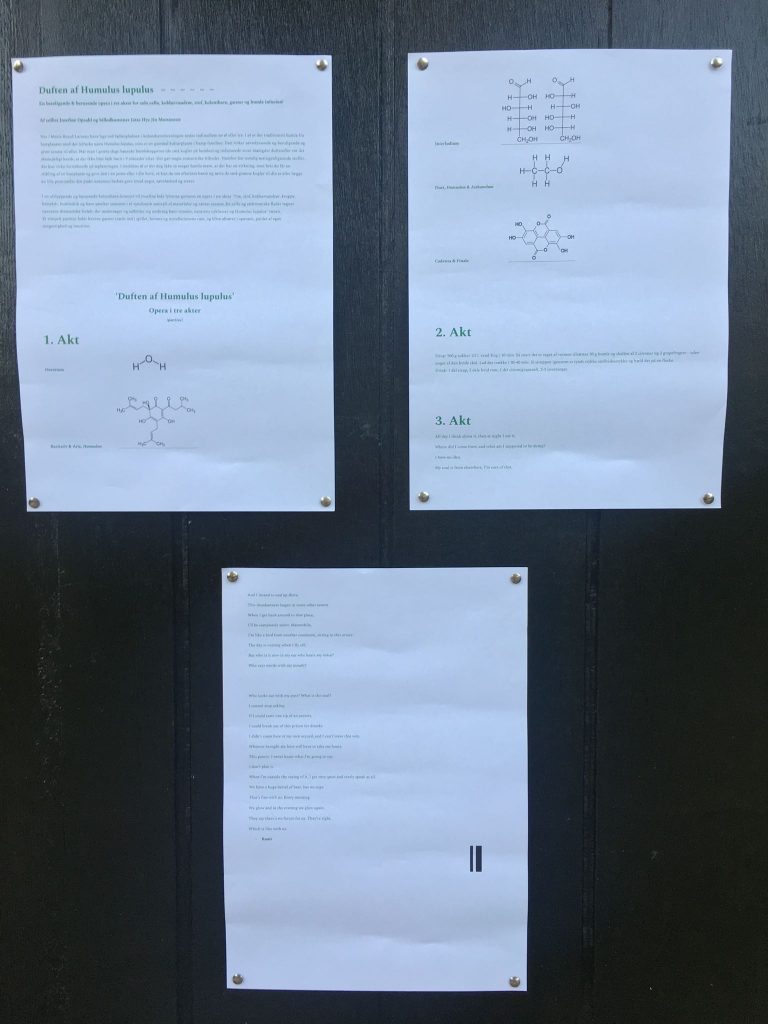 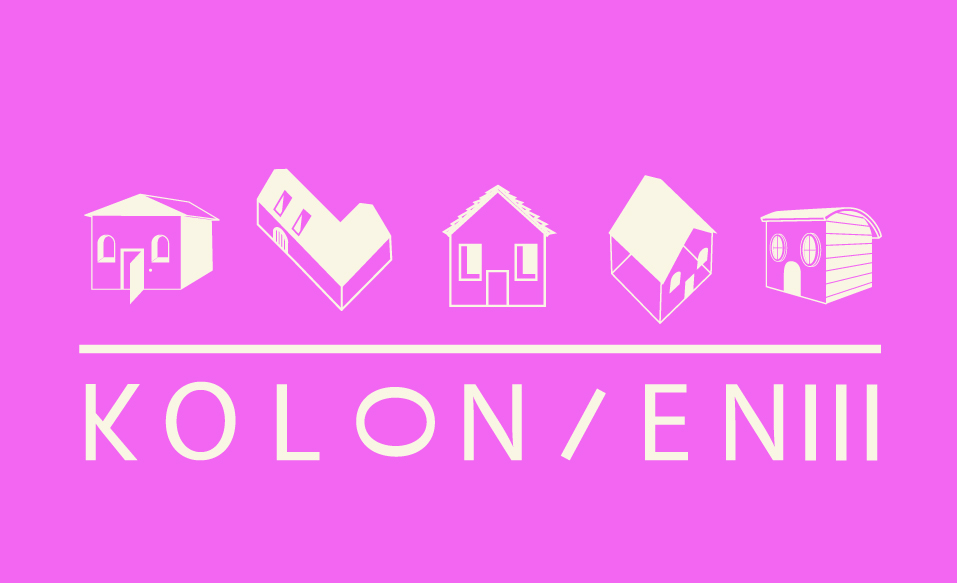 ‘8 Circles’ explores a feminin approach to sound making, composing and notating. The 8 pieces relate to the planets of our solar system, to 8 as a sign for infinity, its mirroring symbol as two sides of one case. Finally the circles are inspired by artwork of the Swedish abstract painter Hilma af Klint (1862-1944). 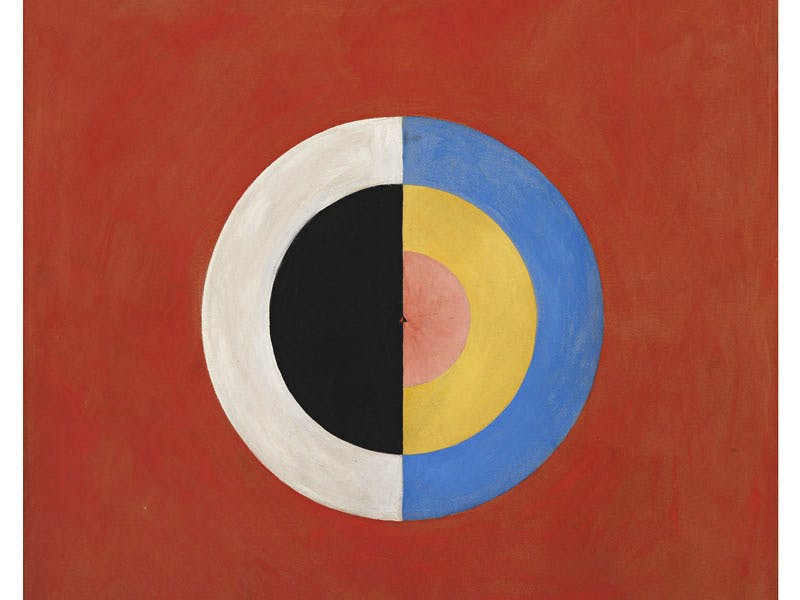